Not all types of neurofeedback are the same. There are various methods and procedures. None of them are bad but we feel that 40 - 80 sessions are too many. Our acual aim is the reduction and thus minimizing the strain on the client.

That is why we use the latest methods based on a clear and scientific concept.

We direct our attention to exactly those regions where there are abnormalities. This concept is based, among others, on a precise quantitative examination of electrical brain activity. 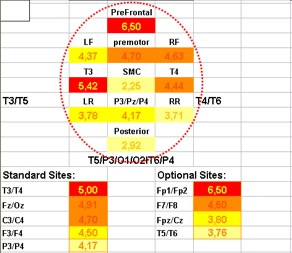 Figure: Determining so-called "hot spots"
On the basis of the symptoms, an initial conclusion can be made about which brain regions could most probably be affected. These conclusions are checked later in a quantative EEG and compared

These  tests are short-term and long-term tests for determining the basic performance of the attention variables such as permanent attention and impulse control. Almost all brain function disorders have a specific effect on attention and other cognitive functions. At the same time, we also conduct other neuro­psychological performance test depending on the symtoms and disorder and the clinical picture.

Figure: Example of a quick test of attention. During this, we measure both the average respone time and the error rate. In this example we can see mainly omissions; the red squares signalise commission errors. The example is typical for e.g. ADS, with slow response times and many omissions. This test also serves the purpose of reviewing the success of treatment as, in most cases of therapy, besides other improvements, the normalisation of these values is involved.

Figure: In the example, we can clearly see a slowing down in the frotal brain regions. This too is typical for ADS, particularly the extreme in crease in the amplitude of slow waves speaks in favour of this diagnosis.

The QEEG (quantitative EEG) is, in contrast to a qualitative EEG at a heurologist's, an instrument for determining the brain's activation pattern. It thus does not primarily serve Es the diagnosis of disorders such as epilepsy or insomnia. we rather measure data deviating from certain frequencies and conncetions of certain brain regions to each other (coherences). The insights gained from this serve the precise analysis of the problems and thus facilitate and extremely specific application of neurofeedback. 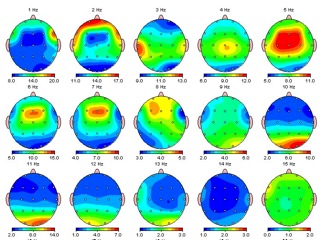 Figure: Partial analysis of a quantitative EEG. 19 electrodes measure each individual hertz of brain activity and its deviation from a healthy norm population.

Types of treatment via neuro­feedback

We mostly rely on the certainty a modern data base offers. This means  a maximum in certainty and the highest possible success of treatment. Training the brainwaves is always aimed at aligning the activity to a healthy norm. In this way, no parameter can be over- or undertrained.

Figure: With z score based neurofeedback, a up-to-date comparison wit norm data is conducted every second of training. The coloured numbers show the respective degree of the so-called standard deviation. The objective is to change these values to 0.0 – 0.4.Via feedback, the brain learns to adapt to the healthy norm.

Bipolar neurofeedback according to Othmer

Sue and Siegfried Othmer are pioneers of neurofeedback. They have been developing their training approach for more than 20 years. This form of training has proven its worth particularly with extreme regulation disorders and behavioural abnormalities. The innovatve development of the ILF (infra low frequency) method has even proven to be successful with disorders such as autism.

This method was primarily developed by scientists involved with the Leibnitz awardee Dieses  Nils Birbaumer at the University of Tübingen. The aim, an increase in cortical arousal, demonstrably leads to improved attention, the person training is better prepared for a following task and is able to solve it more efficiently (Birbaumer, Rockstroh et al. 1990).

Classical neurofeedback according to J. Lubar and B. Sterman (beta training)

This method has proven its worth since the 70s of the last century. It serves the purpose of amplifying certain unfavourable brainwaves whilst mostly very low and very highamplitude frequencies are inhibited. Even in many scientific publications, this has displayed good effects in the case of epilepsy and ADHS. However, we only apply it seldomly because it is usually not specific enough and often requires long periods of treatment. 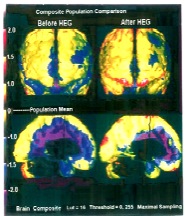 Figure: SPECT images of the cerebral blood circulation with a 67-year old patient with memory loss, anxiety and depression,  before and after 23 sessions with HEG. A significant imporvement in the frontal and temporal lobes can be seen (fewer blue but more red areas instead).

What is HEG neurofeedback?

HEG (haemoencephalography) is an effective method for a wide range of symptoms. No brainwaves are measured with it. The success of treatment results from an increased blood circulation of the extremely high-fibre and highly complex interconnected frontal­ lobe.

It thus has effects on the following areas:

Positive results of treatment can also be gained with migrane, stress and memory problems.

We use cookies on our website. Some of them are essential for the operation of the site, while others help us to improve this site and the user experience (tracking cookies). You can decide for yourself whether you want to allow cookies or not. Please note that if you reject them, you may not be able to use all the functionalities of the site.